I’m not superstitious. Generally I tend to take a pragmatic approach to shoot as with everything else in my life. If things go wrong, my response is generally how to react and adapt to the problem and not wondering what I did to cause it. Still, I think next time I work with Leanne, we’ll probably plan to shoot inside. Outside just doesn’t seem to work out that well for us.

After my backpacking trip in the Grand Canyon and some time in slot canyons in northern Arizona I headed down to Phoenix. First, my flight home left from there. Second, I had set up several shoots with some wonderful models before I left the state. While my shoots while here in June were often frustrating, working with Leanne was a highlight in spite of our unwanted reptilian interloper.

On this trip we’d planned a shoot that I’ve had in mind for a number of months, but never quite had everything line up right. In fact I’d first planned to attempt it while in Phoenix back in June, but the model I meant to work on it with didn’t work out and the other shoot I then planned to try to make it work ended up canceling due to a family emergency. Here Leanne and I planned, but the weather again didn’t cooperate as clouds moved into Phoenix late in the evening. While not overcast, the location I’d planned and concept now wouldn’t work.

So we went to a plan B, which was a location another model had suggested I try. Now the location seemed much better for the weather we had and the two of us headed that way. We got there and things looked good. It was isolated and no foot traffic. Then we found that one little problem as Leanne and I prepared to work – the Jumping Cholla cactus.

If you’re familiar with a cactus then you’re aware they have sharp little spines that can hurt when touched. Those are a nuisance, but the Cholla Cactus ups the ante as those spines have barbs on the end like a fishhook or arrow. Once they go in they don’t easily come out. To see how bad these things can be watch this clip from an outdoors show that also takes place in Southern Arizona. We discovered these on the ground as we got to area I planned to shoot. 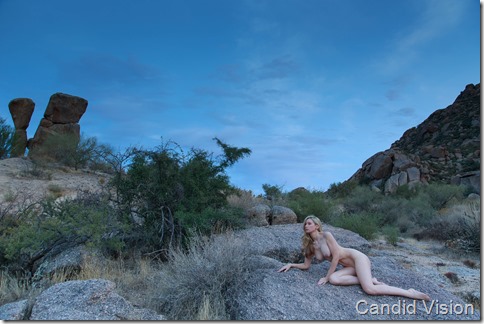 Not really time to try another spot, so we shifted to an area that seemed cactus free. I found a nice rock formation to work around which also had a nice rock for Leanne to pose on to keep her away from any cactus in her vulnerable state. Again Leanne was a joy to work with and never complained about the conditions. For these photos we worked in the fading light getting some nice images that I was looking for. You can see the clouds that had moved into the sky in these photos. While the clouds did not work for my initial concept, I worked them into a setting where they added to the image. Again, when working outside you have to work with nature, and not fight it. You’ll always lose if you try fighting. 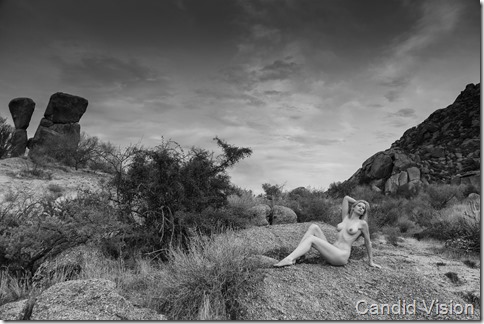 We also did something more along light painting during the shot that I’ll post soon along with the final story of those little annoying cacti. If you can’t wait, see those and more photos from this shoot on Uncovered Visions at http://www.uncoveredvisions.com/2013/12/16/gallery-leanne-leanne-winter-2013/

2 thoughts to “Leanne and Cactus near Phoenix”