Warning! Mostly philosophy and musings ahead, but some outdoor images included at no extra charge. 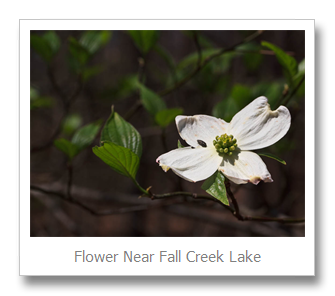 I spent a few days at Fall Creek Falls in Middle Tennessee earlier this week.  The falls is a stunning site, the highest waterfall in the eastern United States, and I’ve visited before, but there was more rain of late than the other visit and it was almost like a different scene.  I traveled light this trip and only took my camera and one lens, but still found time to take a few photos.  Not the normal contents of this site, no models present, but some interesting images in any case.

After getting in Sunday around noon, I had a nice long stretch of free time.  The recent few months have been both busy and a bit turbulent and I’ve only been able to get out into the woods while shooting.  Taking a leisurely walk with no agenda other than enjoying a beautiful, warm spring day felt great.  I had commitment for later in the evening, but for a few hours I only had time.  I started with a nice paved trail snaking along the lake and saw a few flowers peeking out, the nicest being the flower to the left.  From there I continued on past the dam and to the main falls. 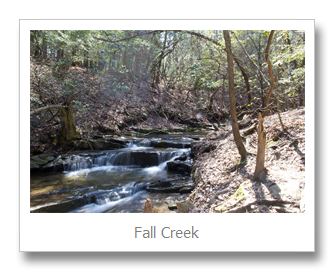 I saw almost no one until I neared the Fall Creek Falls itself.  I spent a few moments at the crowded overlook at the falls.  I took a few photos, but the brightness of the day and angle of the sun did not cooperate with me and I couldn’t get the shots that I wanted.  So I hiked down a side trail that went behind the falls.  Here is a photo taken using the base of the small wooden bridge that crosses this as a tripod.  I believe this is Fall Creek, the stream that just downstream from this spot tumbles 256 feet into a gorge creating Fall Creek Falls.

Being in the woods with just you, your thoughts, and a camera makes an amazing way to decompress and ponder life.  Things become clearer when you only have the sound of birds, frogs, and the wind around you with nothing else to distract from the dialogue in your mind.  The occasional other hiker may pass and exchange a greeting, but you mostly have the chance to visit with yourself.  Sitting and watching ducks swimming on the lake a dozen feet away makes it easier to look inward and reflect upon life.  It gave me a chance to weigh some paths that I’ve been pondering and I came back to my room more than four miles after starting a little tired, a lot sweaty, and feeling more clear of purpose and plan than I had in months.  Questions that had me in turmoil now seem in context and a path has emerged from the cluttered brush. 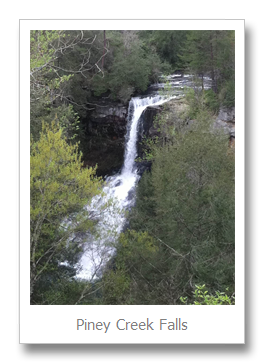 My commitments kept me inside Sunday evening and then much of the day Monday.  Late I made it back out and visited Piney Creek Falls in the same park.  A much smaller falls, but also much less crowded and a bit more unfinished.  There is no paved path here, just a short and steep trail of rock and dirt that ends at an overlook with at with no rails or fencing between you and the canyon.  I didn’t take my camera on this trip, only my iPhone, but that provided the means to take a few photos.  The photo to the left I think is the best of the falls.  Another longer trail leads back behind the falls and to a suspension bridge over the creek just around the bend atop the falls.  The wind made taking a photo there difficult, but I did get one image

As I got back to the room around dark a storm began to blow in.  I sat on the patio and watched the weather blow in taking a few photos along the way.  Without a tripod, I had to function as my own holding still for each photo.  I did manage one very nice view of the lighting over the lake below.  Not long after taking this photo the wind picked up, the rain began to fall harder, and the combination pushed me inside. 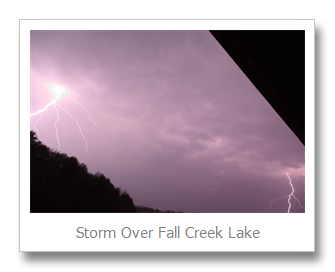 The stormy skies in this image reflected my mind as I’d arrived Sunday, turmoil and questions.  As I went to bed Monday night I felt more the tranquility of Fall Creek above.  But that spot still lies just above the chaos of a roaring falls.  My mind is calmer and my direction clearer, but the questions are still there.  I have a path and a plan now.  It’s not perfect of course, nothing in the real world is, but it fits where I am and where I need to go.  Time alone will tell where it leads me, but I feel more confident than I had before.

I left late morning on Tuesday reminded about the outdoor beauty that had brought me into the outdoor nude work I’ve done much of the past year and increased desire to do more now that weather has reached a warmer level.  I also feel ready to move forward and a calmness I’ve not had for months. 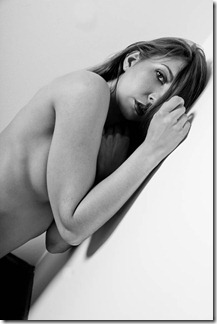 It doesn’t happen at every shoot or with every model, but sometimes while working with a model the two of us enter a state of flow where everything seems to just vanish except for the shoot (for a good overview of the idea of flow I suggest Flow: The Psychology of Optimal Experience

by Mihaly Csikszentmihalyi).  I’ve always found my best work comes from here.  It’s a fragile thing though and easily broken by the smallest outside interruption like a cell phone beep or a knock on the door.  When we’re in the flow an amazing amount of good work can be done in a short amount of time.  The model and I operate almost as a single unit to produce images, lost in the act of creating the images and operating at a level below thought and on instinct.  This image from a recent shoot with Melissa came from exactly one of those moments.

The photos come may come fast or slow, but the transitions move so smoothly that the normal evaluation of each individual photo becomes irrelevant.  Instead of the click, evaluate, change/correct, click process it works more like click, change, click.  In spite of the loss of that evaluation step, I usually find the images are as good if not better than done during the rest of the shoot.

I think this happens because for two reasons.  First is that while in the flow state I’m more focused on the process than the result.  I don’t analyze each image on the back of the camera, I just work on getting the current image onto the camera and I also stop thinking as much about each image.  I see those little moments that might otherwise pass by while I’m planning and just take images as they appear.  Second, the model and I are working as a single unit and I don’t have to pose each image.  I can be reactive to her and let her lead and she can react to my changes without needing verbal instructions.  In the shot with this post for example the pose evolved when I simply moved against the wall Melissa is leaning on and photographed her from a different angle than before.  She adjusted to this new angle without me having to ask or tell her what I wanted.  She just knew how to move for the shot.

When I go through the photos after the shoot I almost always find one photo that just stands out.  It’s not always one that I expected, but as soon as I see the image, the final version just appears in my head.  This photo of Melissa did just that when I saw it.  I saw the above version almost at once.  It has nothing in common with the photos taken on each side of it other than the subject and I think is one of my favorite two or three that I’ve taken with her. 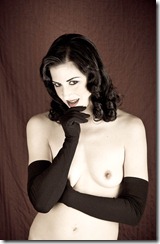 I’ve had two issues come up a few times when working with models travelling through the state.  Both have happened a few times of late so two tips when traveling TN from east to west or vice versa.

Looking at the map will tell you the above, but less well known is that Tennessee has two time zones.  The western two thirds of the state lies in Central Time which is the same time zone as Chicago.  The cities of Nashville and Memphis lie here.  The remaining portion of the state is in Eastern Time just like New York and Atlanta.  The Eastern Time zone includes Chattanooga and Knoxville along with me.  So if you’re driving here from Nashville, it will be an hour later that the three and a half hour distance will indicate before you get here.  On the bright side driving from here to Nashville you’ll end up getting there in only two and a half hours on the clock.

Image above from recent shoot with Nyxon partly spent playing around with gloves.  She had no problem with time zones or the size of the state and was right on time.