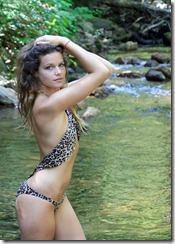 For my shoot with Mya Matthews back on Saturday I decided to head to an old favorite location.  This location was the one that I’d mentioned in my post about the storms in late April where the storms had been particularly strong and at least one tornado had touched down.  I’d last been there in mid-April, a couple weeks before the storms, and knew there would still be signs of the storm.  But I was surprised at the destruction still visible.  On the drive there I saw a metal roof on a house that looked like like someone used a giant can opener on it.  I saw several buildings that had been destroyed to the foundation.  The most striking was a home where only part of one wall and the foundation remained, but the stove next to that wall looked so untouched that you felt you got could go up to it and fix lunch right then.

The parking area when we arrived was more crowded than I’d liked and it was a bit later in the day than I’d hoped, but by staying off the main paths as usual we avoided seeing anyone until on our way back to the car after the end of the shoot. 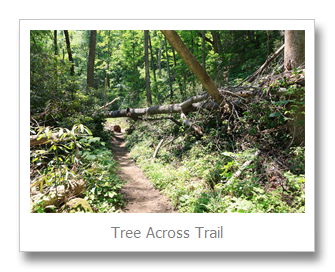 Out in the woods the destruction was neither as severe or as widespread as seen on the drive there, but there were signs of the storm everywhere.  I saw dozens of trees, some more than a hundred feet high not just broken, put ripped from the ground roots and all.  Broken branches and limbs were common everywhere.  The photo to the right shows one large tree that had fallen across the trail, but leaving enough room to walk under it.

The damage only affected one location I’d planned to shoot where a small tree had fallen in the middle of a clearing and too much debris cluttered the ground around it.  Overall the shoot went well and Mya was a joy to work with and I’m hoping to get her in for one more shoot her fall schedule makes that more difficult.  While working I did find a new area that we explored a bit and I will have to go back there again soon to see if this new spot will provide some interesting images in the future.

Image at the top one a swimsuit image from the shoot with Mya.

One thought to “Shooting with Mya and Changes in Nature”